DETERMINING THE VALUE OF YOUR COMPANY (PART 3)

Finding the multiples essential to determining your company’s value

Just as a great dish requires an accurate recipe, you can’t build a credible valuation without using the right multiples.

Multiples and valuations go together like meals and recipes. Just as a great dish requires an accurate recipe, you can’t build a credible valuation without using the right multiples. CFOs know multiples are the centerpiece of every valuation methodology, and that’s why we put them at the core of the method we created, called QuickValue.

The two principal differences between QuickValue and other methods are, first, we use value drivers as the focus of the valuation process. Second is that QuickValue is designed to help executives determine a value for their company without hiring third-party advisors. Our previous installment in this series covered how to find your company’s key value drivers and arrive at a Value Driver Score. Here, we’ll look at the other side of the equation — pulling together your multiples.

While QuickValue is designed for privately held, mid-market companies, the process uses multiples from public companies. This information is refreshed every day that the stock market is open, and is easy to find. Multiples from M&A transactions are also important but are less reliable because they are episodic — the deals occur over time. Gathering sufficient data points just from M&A to draw conclusions may require using transactions from six months or a year ago, which may not reflect current market conditions. M&A multiples are also harder to come by. Information about purchase price and EBITDA or revenue are not usually released for private M&A transactions. For these reasons, public multiples are the standard for QuickValue.

There are several straightforward ways for obtaining public multiples for your industry. You can find them yourself or enlist the help of an investment banker or other professional. Yahoo Finance and Google Finance may also have what you need. The key is to find and use the most relevant set of comparable valuations from companies that are similar to yours. Otherwise, your multiples range will be skewed.

In many cases, these public company multiples will have already been calculated for you. If not, then simply take a company’s enterprise value and divide it by its EBITDA (or revenue). A public company worth US$500 million, with EBITDA of US$50 million, has an EBITDA multiple of 10x.

Multiples vary widely, even within the same industry. Below are multiples for two segments are of the technology industry, as an example.

QuickValue requires multiples from 15 relevant public companies in your industry because, unlike other valuation methodologies, QuickValue creates a valuation range rather than a median value. When medians are used, there is a tendency to apply the same median to all companies, which doesn’t account for their differences. Using a range instead of a median allows QuickValue to distinguish between top performers, which deserve to be at the high end of the multiples range, and those that belong nearer the bottom.

The next step is to rank the 15 public company multiples from highest to lowest. You then create a range by selecting the multiples ranked fourth and 12th. These multiples become the bookends for your range, with the fourth as the highest (the upper median), and 12th as the lowest (the lower median). We exclude outliers such as those ranked first, second or third and 13th, 14th or 15th, because they may be abnormally high or low.

This is how a ranking of 15 public company multiples might look: 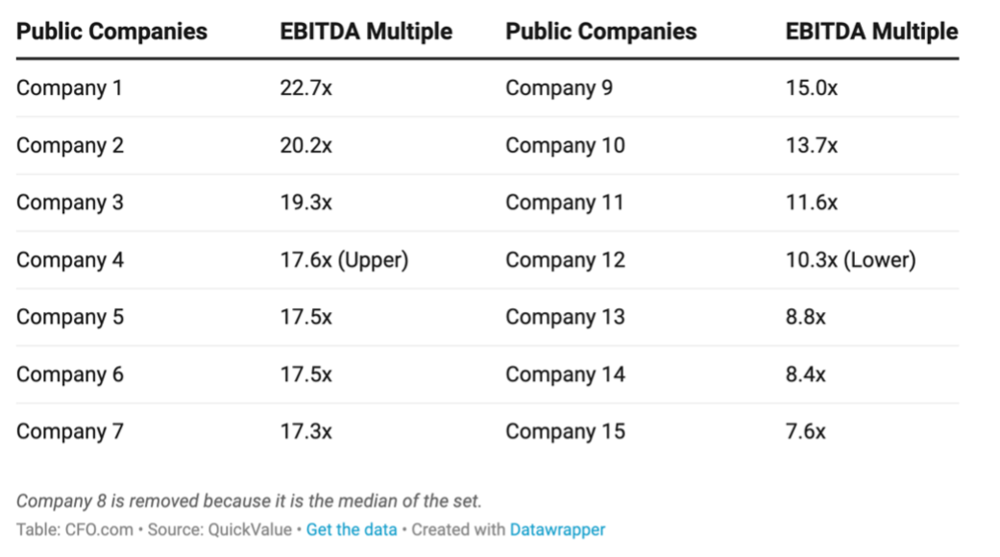 Compare yourself with similar businesses through a close analysis of market-rate multiples to determine your multiples range, using the Oaklins Valuation Index.

Once you’ve determined your multiples range, the next step involves adjusting the range to reflect the smaller size of private companies. For example, the multiples for a company with revenue of US$50 million are typically going to be lower than for public companies. That’s because the data set of 15 public companies may include ones with US$1 billion or more in revenue. A good benchmark is to adjust public medians downward by 25–35%, depending on your industry. If you want to be more precise, you can find the discount for M&A transactions by asking an investment banker who specializes in your industry.

You now have a multiples range that you can use with the Value Driver Score from our previous article to calculate your value. Your hard work is about to pay off. In our next article, we’ll show you how to use these multiples in conjunction with your Value Driver Score to determine the unique value of your company.

More about Reed Phillips and Charles Slack, and their book ‘QuickValue’

Reed Phillips is CEO of mid-market M&A firm Oaklins DeSilva+Phillips, and Charles Slack is a business and financial writer. They are the co-authors of the book, ‘QuickValue: Discover Your Value and Empower Your Business in Three Easy Steps.’ Tables in this article originally appeared in ‘QuickValue’.

This is the third article in a five-part series written for CFO.com about how CFOs can lead an internal team in determining their company’s value. The other articles in the series are:

Part 1: Are you your company’s Chief Value Creation Officer?

Part 2: How well do you understand your company’s value drivers?

Part 5: Putting value at the center of your strategic planning

DETERMINING THE VALUE OF YOUR COMPANY (PART 4): The role of CFO has many facets to it, and one key task is unlocking new value for the company.

Read article
2 November 2022 How well do you understand your company’s value drivers?

DETERMINING THE VALUE OF YOUR COMPANY (PART 2): Numerous advantages can come from internally evaluating your company’s value, but it’s a process th...

DETERMINING THE VALUE OF YOUR COMPANY (PART 1): CFOs need to start seeing themselves as chief value creation officers to keep a close eye on their ...